The Presentation of the Lord 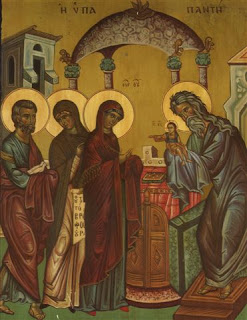 Behold, I send my messenger to prepare the way before me, and the Lord whom you seek will suddenly come to his temple; the messenger of the covenant in whom you delight, behold, he is coming, says the Lord of hosts. But who can endure the day of his coming, and who can stand when he appears?
For he is like a refiner's fire and like fuller's soap; he will sit as a refiner and purifier of silver, and he will purify the sons of Levi and refine them like gold and silver, till they present right offerings to the Lord.
(Mal 1.1-3)
Lift up your heads, O gates!
and be lifted up, O ancient doors!
that the King of glory may come in.
Who is the King of glory?
The Lord, strong and mighty,
The Lord, mighty in battle!
(Ps 23.7-8)
Since therefore the children share in flesh and blood, he himself likewise partook of the same nature, that through death he might destroy him who has the power of death, that is, the devil, and deliver all those who through fear of death were subject to lifelong bondage.
(Heb 2.14-15)
.  .  .
The gospel story is familiar enough: Jesus is presented in the temple; Simeon makes his famous proclamation, 'mine eyes have seen thy salvation'; and Anna recognizes in the Christ child the redemption of Israel. But how? Both Malachi and the psalmist point to a fearsome figure: the one who is coming is 'like a refiner's fire' and 'The Lord, strong and mighty'. Yet the 'light for revelation to the Gentiles' is neither a soldier nor a refiner, but a baby.


A baby? So it is: he 'partook of the same nature': ours. The Lord does not enter the temple in strength and glory, but in obedience. Joseph and Mary 'brought in the child Jesus, to do for him according to the custom of the law' and 'when they had performed everything according to the law of the Lord', they returned home. The pioneer and perfecter of our faith began in the usual manner, being taken to the temple as the law commanded.
The light of salvation dawns in the most unexpected way; God's extraordinary grace comes in the most ordinary way. And it is for us--the writer to the Hebrews makes that clear:
'For surely it is not with angels that he is concerned, but with the descendants of Abraham. therefore he had to be made like us in every respect, so that he might become a merciful and faithful high priest in the service of God, to make expiation for the sins of the people. For because he himself has suffered and been tempted, he is able to help those who are tempted' (Heb 2.16-18).
His obedience makes possible our redemption; in his faithfulness, we are made faithful; he became all that we are, so that we might become like him.
That is good news, indeed.
Posted by m at 1:42 PM